Wild One the Third

Living this life I call my own.

Poor, neglected blog of mine. The start of a new school year is to blame for my absence. I knew that was going to happen so I’m not too torn about it. Priorities, right?

Moving forward, I did want to put together a short recap on a race last week. Kyle and I ran the Susan G. Komen 5K Race for the Cure here in town last Sunday. (It’s so nice doing in town events…I can’t say that enough!)

I honestly did not feel like I was going to perform as well at all when I woke up Sunday morning. I had spent the day before tailgating and going to the Mizzou game and filling up on burgers, pizza and maybe a couple beers. Maybe.

On top of that, my roommates decided to throw a party that Saturday night so I got little sleep. 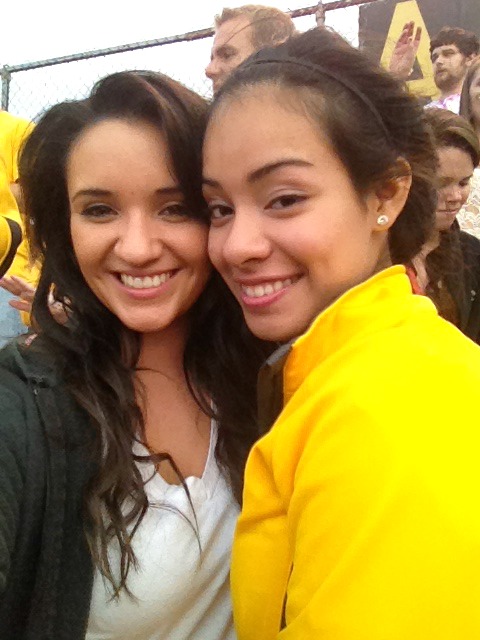 The tailgating and football made for a great time, of course! But not the best for pre-race day–especially with all that unhealthy food. It was a bummer too because I had “trained” pretty well and had some awesome runs in the days leading up to race day.

Sunday morning. I was scheduled to start running at 8:30 AM. We had planned to leave at 7:40 to be there at around 8. We didn’t leave until 8 and even then we had to turn around because Kyle forgot his headphones. Side note:  Usually I would have freaked out and made a big deal out of something like this, stressing myself out and every single person around me. I’m far too dramatic sometimes. But I kept myself from doing this because I didn’t want to ruin anyone’s morning. That’s not very nice. Kudos to myself.

We got to the site and at this point was getting a little anxious because it was about 8:20. I wasn’t warmed up, stretched out and we were going to get left behind! I was able to get a couple minutes of stretching–not nearly enough as I would have liked, but it sufficed. Also, no one was left behind so that was not a problem.

The timed group–myself included–went first. Kyle didn’t run it competitively/timed so he took off after my group started.

There were people of so many age groups participating in the 5K. It was awesome! The support and encouragement throughout the course was equally as awesome!! I run with headphones. I’m not sure why but I get freaked out listening to myself breathing hard and hearing my footsteps so I always run with headphones when I’m running on my own time. At events, though, I leave the headphones at home. I’m afraid I’ll miss something or not pay attention to something on a course because I’m distracted by my music. I also know that most likely there will be people shouting out words of encouragement to the runners and I definitely wouldn’t want to miss out on that! It’s much appreciated and helps me push through till the end!

The cool part about this course was that it ended inside our Missouri Tiger football stadium. We ran the last 300 or so meters on the track. As I approached the tunnel to enter the field, my shoelace somehow managed to untie itself. #RunnerProbs to the max! I was not happy with my shoelace at all. I was on a roll and almost done so there was no way I was going to stop to tie my shoe. Instead, I slowed my pace and focused on not tripping and landing on my face. My darn shoelace kept me from sprinting to the end.

There were cheerleaders and volunteers cheering the runners on for the last few meters. It was awesome, needless to say. 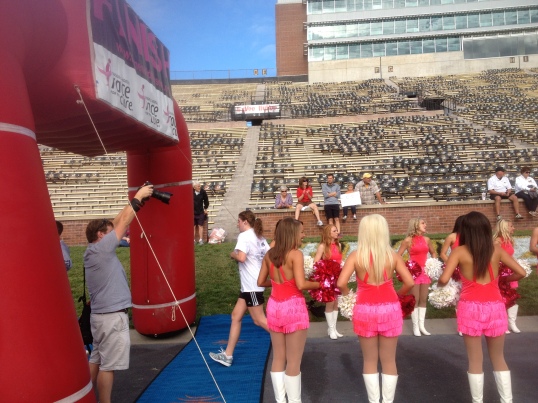 Since Kyle started a bit after me, I was able to see him cross the finish line. Yay! Then we both hung out on the field for a while and stretched. We immediately talked time. We tracked our runs and were so impressed by our times. Neither of us were expecting good performances out of ourselves. I’m pretty sure Kyle PR’d and I have no idea anymore what my 5K PR is. All I know is that I had a great pace with an official time of 26:52.

We couldn’t have been any happier with our performances!

But it was time to sleep right after that race. Right back to bed I went. You sleep so good after you’ve finished an awesome run…

Now if I thought I was nervous for that 5K, I’ve got Warrior Dash coming up this weekend! Yeah, super nervous and definitely not ready for that one. I haven’t been doing enough pushups and chin ups as I need to be doing.

I need to get on top of that asap.

My plan for the Warrior Dash is to have fun, get dirty and take as many pictures as I can! We’ll see how that goes! Wish me luck!!

I ran the Epic Mud Run last week and boy was mud the name of the game! That’s all the running/treading through mud that I did for the week. So we can sum up last week’s Monday Run Day with that event.

This was the first mud run I had ever done and it was a blast. I had an awesome team to run it with too. We–honestly, mostly me with the help of Kyle–made the most legit team shirts ever. We were the Bad Mudder Muckers. Say that 5 times real fast.

We got some loving and “good one’s” along the course from some people. 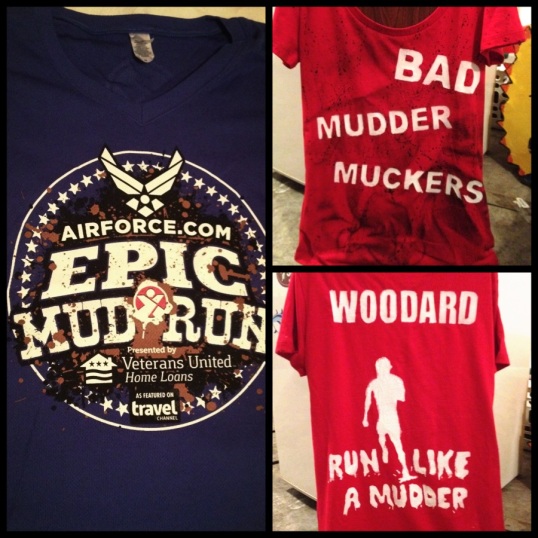 The shirt on the left was the event shirt. The were pretty sweet shirts. The guys lucked out and got tanks. Not every guy likes or looks good in tanks, so that was unfortunate. The shirt on the right is one of the four team shirts that we made. A lot of time and work and time went into those babies. They were about 10 dollars per shirt to make. Nice little deal. I may have to dedicate an entire post to the making of the shirts. It was a blast! 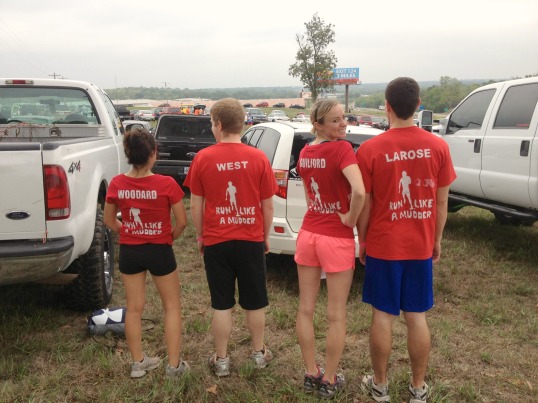 Cool back view. It’s important to note that I free handed the “run like a mudder” with the silhouette of the man running to make the stencil. It turned out better than I hoped it would.

We did one of the later waves which worked out well since I had to work so early in the morning. We got there about an hour before our wave started. There were a lot more people than I expected and of course there was mud everywhere.

I mentioned last Monday Run Day that this event was a color/zombie/mud run. When we got to the starting corral, there were little cups of colored powder that accounted for the color run part. We covered ourselves and each other with different colors. That’s as exciting as that part was. The idea wasn’t executed as well as it probably should have. All the color was just going to be covered in mud and washed off later during the course. Sadness.

The course began by running through a barn filled with zombies. Some of them weren’t scary but others got me with the element of surprise. There was one zombie chick that just followed me for the longest time in the world. Since this was the beginning, we were still pretty congested and had no running room. So we got through this part by walking through the barn and climbing over quite a few walls.

From there on, we ran the muddy course. It was fun running up this muddy hill while having a hose sprayed over us. 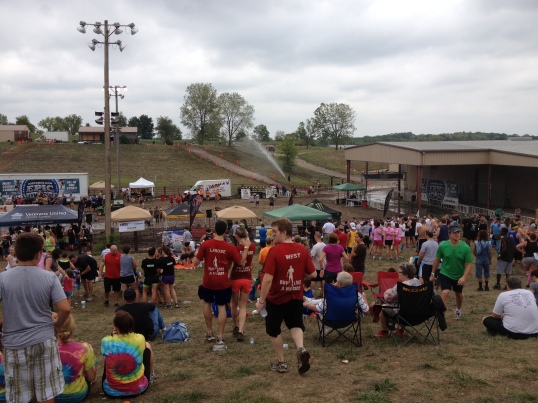 There were muddy hills, ropes to climb hills, the muddiest trenches ever, walls to scale…and tons and tons of mud. We got to one of the two 15 story water slides which was a blast sliding down. Then we went through probably a quarter mile of the thickest, deepest  mud in the course. This part definitely slowed me down. Each step felt like I was going to lose my shoe! It was crazy.

After coming out of that long stretch of mud, we did a little more running on an incline on a path running through woods. It was difficult getting a running start because my feet felt like lead because of the mud. The sun started drying out the mud as I went along, though, and it was caked on me even more.

We finally got to a pit filled with water. As I ran up to it, I noticed volunteers dumping bags of ice into it. I hadn’t realized that the water would be ice cold when I plunged myself into the pit. The mud washed off and I got to cool off a bit. It felt so good! We did a little more running until we got to the final huge water slide. I slid down with Kyle. I kept slowing down for some reason so Kyle caught my legs and pulled me down along with him.

At the end of the course, there were volunteers ready with water bottles, gatorade, bananas and crackers to snack on. We also received some pretty awesome glasses.

Then we took after photos! We were a big mess!

This event was such a blast! Kyle and I recently registered for the Warrior Dash in St. Louis. That’s in exactly 20 days! Eeek, I just realized that! I feel like this event will be the epitome of mud runs…and blood, sweat and tears.

So, needless to say, I’m pretty stoked for that one! Also exciting is the Susan G. Komen Race for the Cure 5k that Kyle and I registered for. That one is next week. #CancerSucks!

What’s really funny is that this is the first “regular” 5k that I’ve done in forever; no zombies, color or mud! For anyone keeping track, this will be three events in 28 days. Wow! We sure are getting a good start to race season!